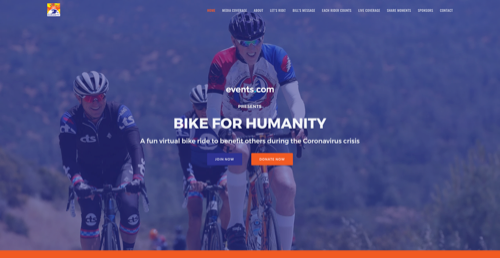 #BikeForHumanity is about taking a passionate, purposeful, and virtual bike ride in your neighborhood with Bill Walton and his friends to raise money for super important and immediate causes.

Seeking A Way To Reach More Participants Without Spending Any Money

For their inaugural event, it was important that Bike For Humanity build authentic word-of-mouth on viral platforms like Instagram. Authenticity is especially key for tight-knit communities like bicyclists, so trying to reach them with ads and professional influencers wouldn't be nearly as effective or on-brand. Plus, as a charity event, every dollar spent acquiring a rider or donor meant a dollar that wasn't going to the victims of Covid-19.

Bike For Humanity needed a way to identify which of their existing riders have influence on Instagram, build closer relationships with them, and extend their reach to the followers of their riders.

This was probably the easiest and most effective influencer campaign I've ever run. We had a strategy call with Gatsby in the morning, our campaign was live that afternoon, influencers started posting by that evening.

Bike For Humanity integrated Gatsby into their registration form hosted by Events.com so that they could identify authentic micro-influencers the moment they signed up to ride.

Their influential registrants are the most authentic micro-influencers they could ask, their real riders. Now they just needed an easy way to reach those netowrks. So Bike For Humanity looked at their data from Gatsby and invited 54 of their riders to post on Instagram, offering them simply an extra free t-shirt:

Gatsby unlocked our influential riders, allowed us to reach their networks. Gatsby grew the success of our event. Highly recommend!

Bike For Humanity saw a significant ROI when factoring in the thousands of new targeted consumers they reached with just about $200 spent on swag, the time they saved with just 3 hours of work, and the increased brand affinity they generated with those micro-influencer donors.

Of the ~1,000 attendees, 23% opted to supply their Instagram username, 18% of those had above > 1,000 Instagram followers. 39% of the micro-influencers that they invited to collab, accepted the deal and posted about Bike For Humanity. These 21 micro-influencers had a collective reach of 23,685 targeted people, and their 19 posts saw a 9.4% engagement rate resulting in thousands of likes, comments, video views and impressions.

Via our platform, Kulani will be able to house their micro influencers in a safe and creative space. Influencers will be able to Apply, Create, Share and Connect in return for special discounts, first looks, and even a trip to the elusive ‘Sunshine Island’... all while being easily-tracked by the social team.